Walkerville Brewery is a well-appointed microbrewery located in the City of Windsor in a district known by locals as Walkerville. Situated within the area originally developed by Hiram Walker over 150 years ago, we are proud to complement our neighbours, the C.C. Brand Centre and Pernod Ricard to form this modern day distillery district. The craft brewery occupies an 18,000 square foot building once known as “Surge Plant 16” and is located only blocks away from the original Walkerville Brewing Company established in 1890.

By handcrafting unique styles in small batches using quality malted barley, hops and pure water, we deliver fresh flavourful beers to our customers. Offering a range of flagship beers, seasonal offerings and special edition one-off beer styles; there are always unique and interesting beers flowing from the tanks and taps of Walkerville Brewery.

The brewery itself not only houses our brew house and fermenters, but also contains a retail shoppe, beer store, tap room and event space that is open 7 days a week. Join us for a tour, special event or for a glass of the freshest beer in town! 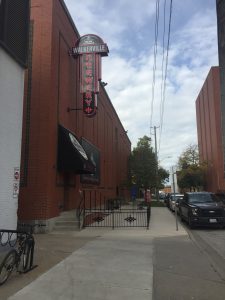